If you ever worked with Android or know someone who did, you have probably heard of the fragmentation issue. Android OS is an open source project which results in a large variety of different devices that can be grouped not only by manufacturers but also different screen resolutions, sizes and brand specific OS “look and feel” which can result in different behaviour of an app between devices. And if that’s not confusing enough, device popularity shifts depending on the geographical region we decide to target. No matter if you’re a developer or a business owner, your aim is the same - provide the best, most seamless experience for the majority of your users! With this article I’d like to help you get closer to that goal.

I decided to break down the topic into two parts. This week I want to discuss what to consider when deciding which minimal OS version is worth supporting and have a look at the OS version fragmentation in the UK market, according both to public stats and data I collected on the projects I worked on. Next week I’ll share some insights on the UK market share by the device vendors and also put it into a global perspective.

How to decide what minimal Android version to support

First important step you need to take before starting with app development is to decide what’s the minimum OS version you want to support. This will define which users can install the app from the Google Play Store. It’s not an easy decision, as every version you choose comes with some trade-off. Setting minSDKVersion low guarantees that your app will run on almost every Android device available. But is it really what you are after? If you set it too low you’ll lose access to the latest fixes and features. And that may result not only in an outdated experience for the users but also increase time and costs of development. On the other hand, aiming too high may vastly reduce your future user base. Make sure that whatever decision you make is justified. That may depend on the target audience of your app i.e. if you are developing a gov or public solution you’ll want to offer it to as broad an audience as possible. And again - if you’re working with high-end technology like VR then target your app to early adopters, “geeks” who don’t save money on latest devices. In some cases making sure your app is locked to the recent OS version might be even necessary, like with Android 10 which introduced support for the foldable devices.

What’s recommended minSdkVersion at the moment? Personally I use SDK 21 which corresponds to Android 5.0 (Lollipop). This is the version where Google introduced Material Design, which now is an industry-wide accepted standard. According to the latest Android Studio data, following this apporach will make your app available for over 94% of Android users. But Lollipop is already a 6 years old system! Getting a new device which still uses it is technically impossible, so you may like to bump it slightly higher i.e. to version 23 that is Android 6.0 Marshmallow (almost 85% of the global Android user base). This version allows you to use app linking (helpful tool for marketing purposes) and fingerprint authentication - again a mobile industry-wide standard which makes the user experience more seamless. 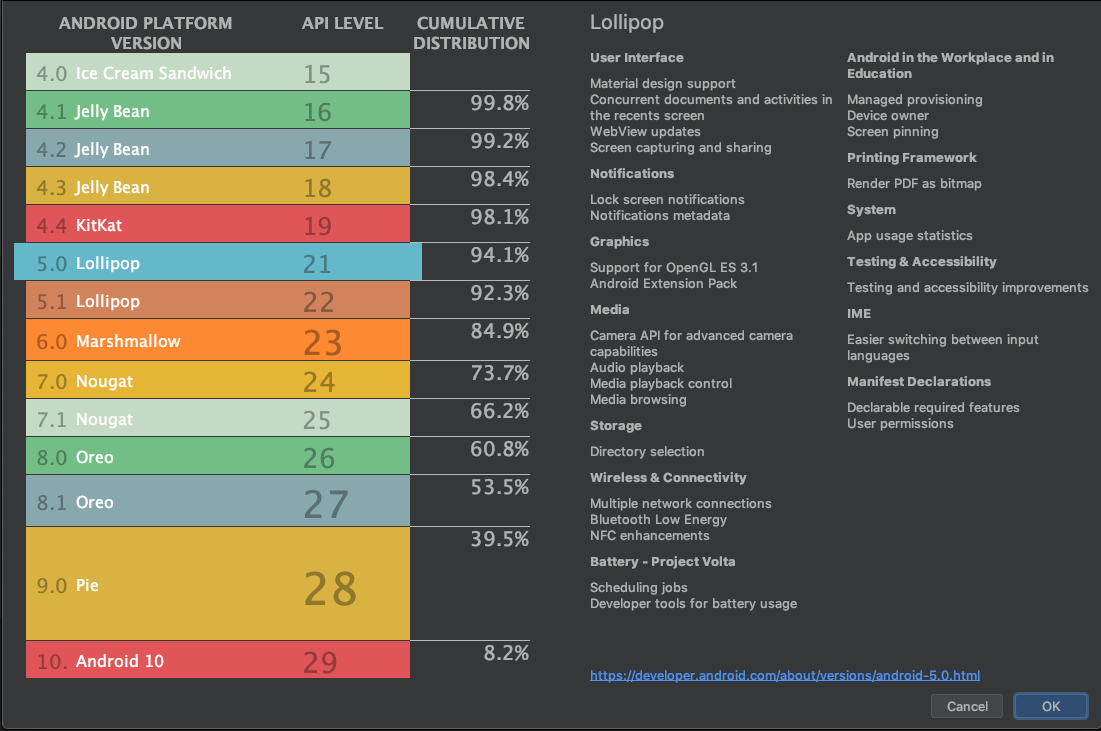 Every time you’re about to create new project, Android Studio Project Wizard provides updated stats along with the detailed, technical information about what features a specific version introduces.

Also you may take into consideration the latest status of minSdkVersion twitter user. So far it turns out to be a practical and rational indicator. 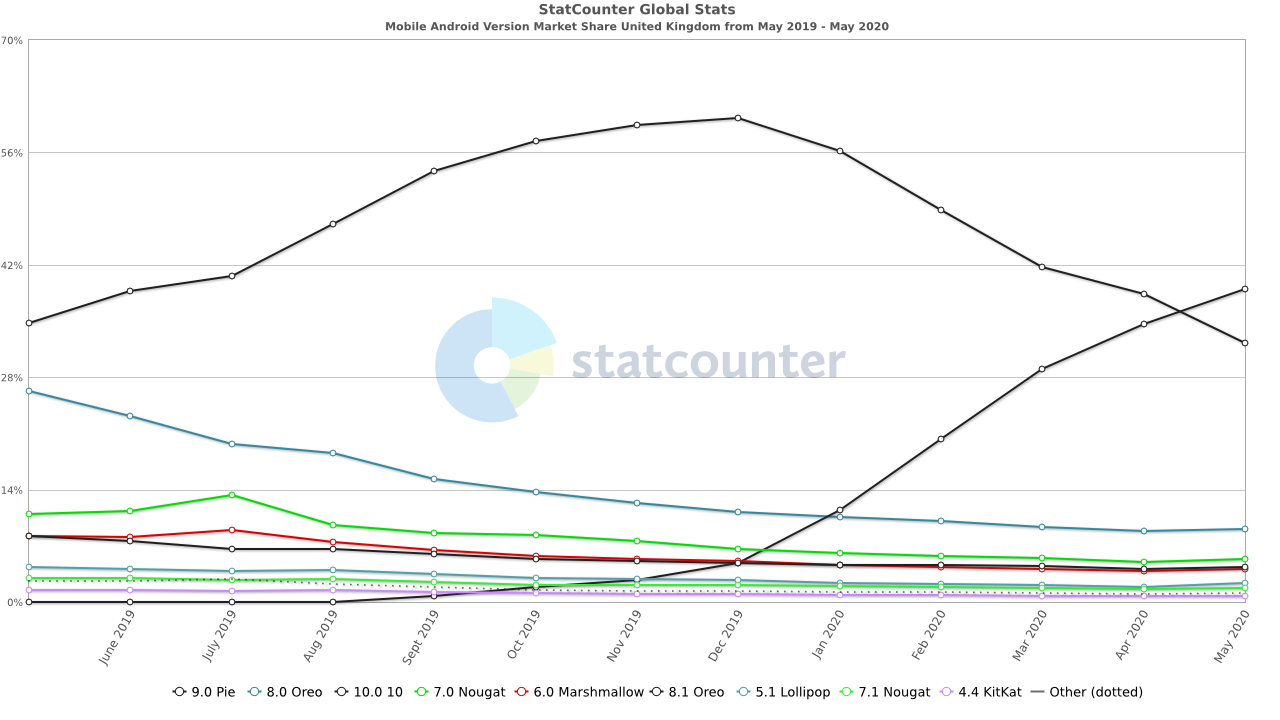 Above diagram shows the current Android Version Market Share in the United Kingdom. What it tells us is that the UK doesn’t like to drag with updating their mobile systems. In 2019 we could notice a successive increase of Android Pie (9.0) adoption rate, which since last December started giving place to its successor - Android 10.0. Between April and May 2020 the latest Android version exceed its predecessor, resulting in 38.9% of the UK Android base having it onboard. When we compare this date with a similar period in 2019 we’ll also spot some familiarities: 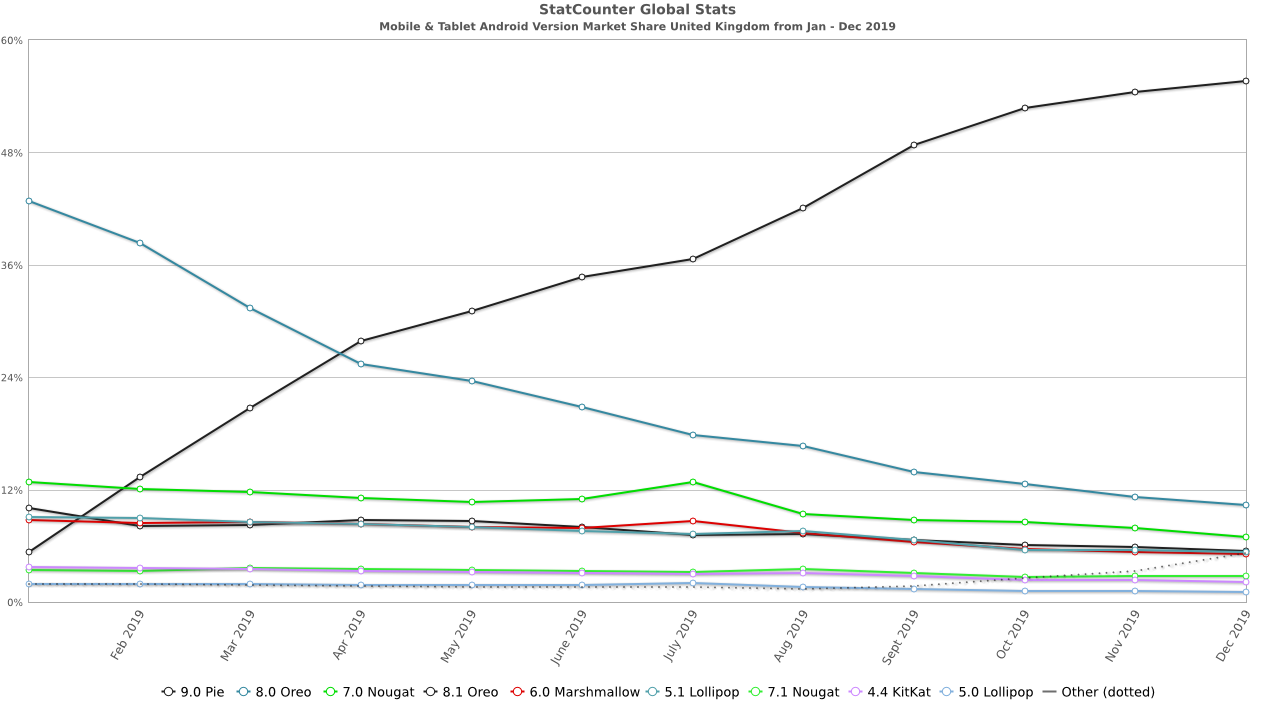 It’s between Dec/Jun when adoption rate of latest Android OS starts to rise up. It’s not a coincidence. New Android versions are released to the public each year around autumn. This is when the Google flagship models - Pixel - get their update. For other manufacturers it’d take at least a few months to offer an update, as they need to adapt and customise the new OS for their own devices and needs (check my other article to find out more about important dates in the Android Calendar for 2020). Also manufactures usually prioritise updates for their latest devices and then follow with updates for the older ones.

Another reason for faster adoption of latest versions of the Android system is Project Treble, created by Google in 2018 alongside the Android 8.0 Oreo release. Its goal was to make it easier for the devices to update and now, 2 years later, we can see the results it has for offering the latest OS version across devices from different manufacturers. 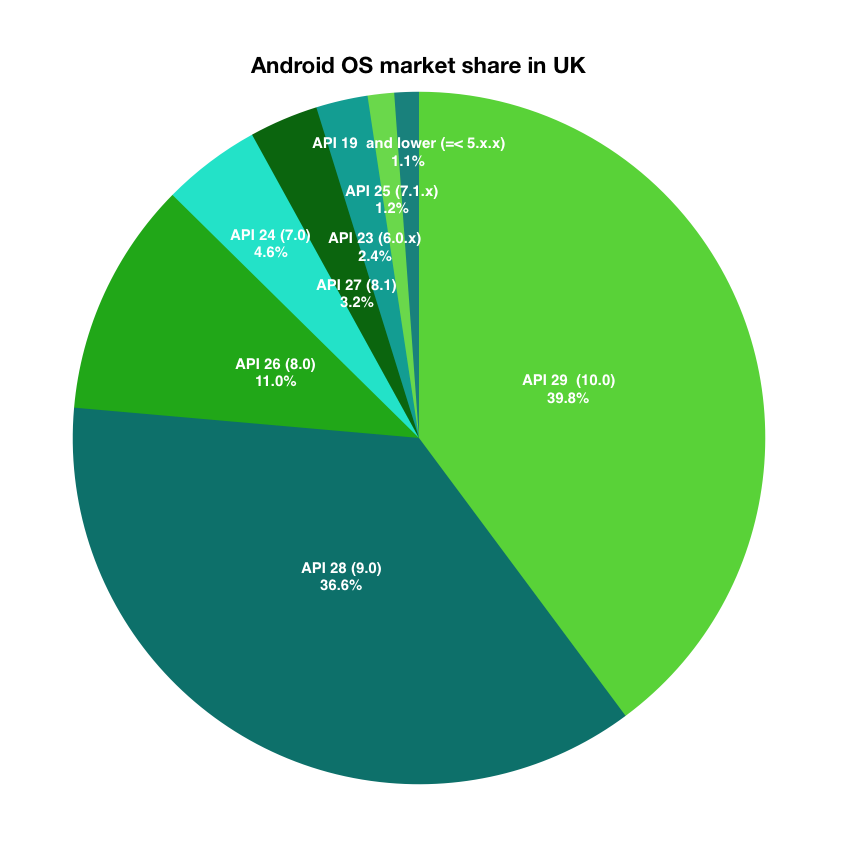 Source: own data collected between March and June 2020

The data collected from the projects I had a chance to work on corroborates the stats presented above - Android 10 and Android 9 are used by the majority of our clients. However, despite OS 5.1 and lower contributing to an entire userbase of only 1.1%, a business decision was made to still support them. It’s an important example showing that with a massive user base, even a small percentage is still an important number - as it adds significant value to the app revenue!

In the second part of this article we’ll see which device manufacturers enjoys the biggest slices of the Android cake in the United Kingdom. So far we learnt that unless your app takes advantage of the latest OS features, it’s recommended to pick minSDK with prudence. It’s worth remembering the timeless lesson the Greeks taught us with their myth about Daedalus and Icarus. To make sure your app escapes the prison of your development space and arrives succesfully to large number of pockets, fly neither too low nor too high - so the sea’s moisture would not clog your wings nor the sun’s heat melt them. However, have courage to take the step forward - that’s necessary to start the flight and as the users update their phones every year, you don’t want to be trapped on the island of solitude, wasting your resources supporting technology no one benefits from any longer.