Last time I discussed the Android fragmentation from the perspective of various OS versions, today I’d like to take a closer look at the hardware side and the brands who deliver it to our pockets. And it requires us to change the perspective on what the Android ecosystem is - so far when I’ve spoken about Android devices I mentioned them as one team. However as with any other successful team, this one is built up of many competitive players where each one has ambitions to wear the yellow shirt of a leader.

In business, we can often hear about the importance of being first. However Google and their mobile platform is a good example that being second may still guarantee success - the company made a great journey over the last decade to become the number one mobile operating system in the world. 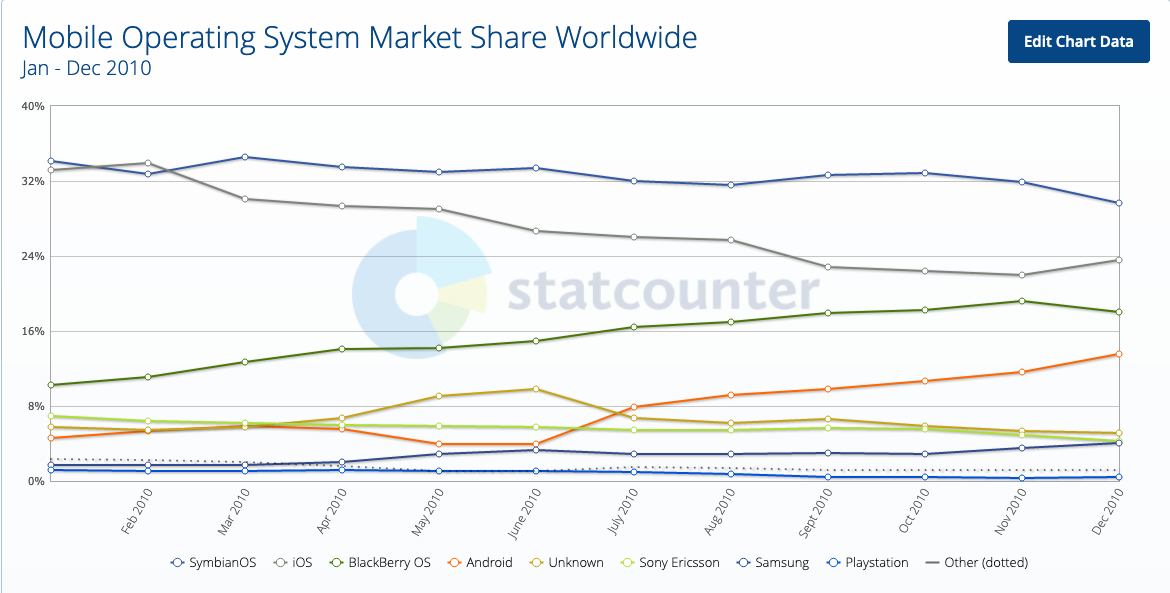 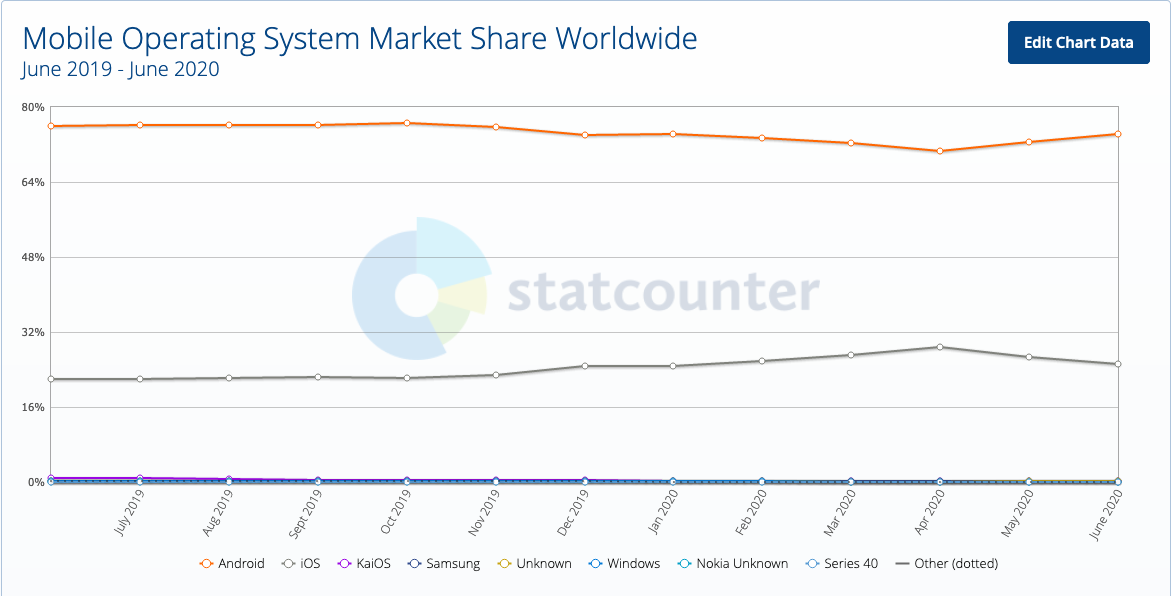 Competition between Android and iOS on the UK market is very tough, and just recently Google took a lead by 7%: 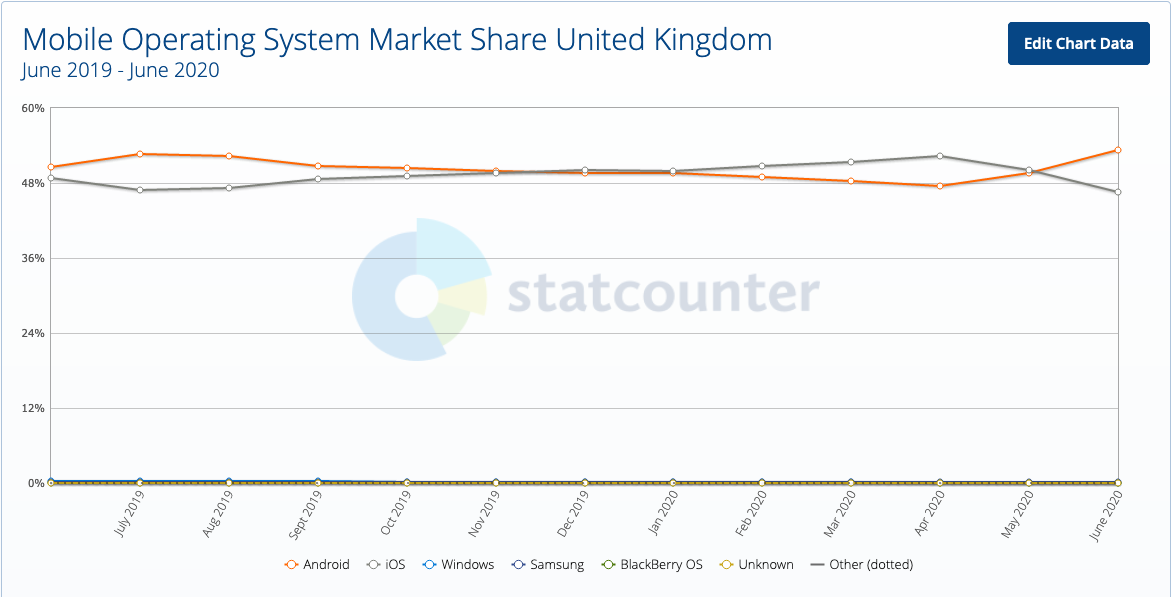 In 2017, there were 79.17 million mobile subscriptions in the UK, across the entire population of 66.04 million inhabitants. It’s clear there’s big money on the table and no one should be surprised by the number of companies who compete with each other to claim their own share. 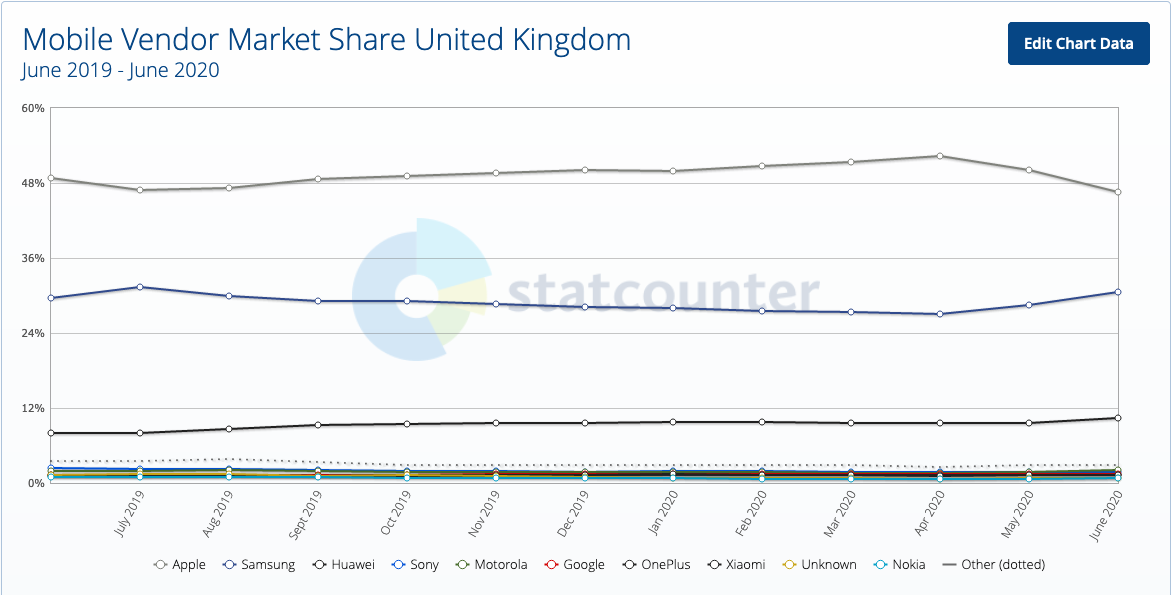 The above diagram shows competition within the Android ‘Family’ which I mentioned at the beginning of this article. Samsung is the current leader - not a surprise, however it still may put a smile on the faces of those who remember how a Korean corporation joined the mobile race. Starting with its own system, Bada, Samsung positioned itself as an Android competitor in the early days. However the decision they made to abandon their child and combine efforts with Google turned out to be extremely effective. Starting with the first series of powerful and robust Galaxy devices, over the years Samsung has constantly built their position, offering devices in every price range. That resulted in becoming a number one player in the Android world and the biggest competitor for Apple - which resulted in multiple lawsuits on both sides.

The Times They Are A-Changin’

But just as Greek myths are timeless, so are the lyrics of the popular Bob Dylan song:

And we could already observe this around 2010, when the old kings of the mobile world (Nokia with their Symbian OS and BlackBerry with BlackBerry OS), who were once dealing the cards, fade out within just a few years and never manage to regain their glory - despite multiple attempts. Their examples show that no one can be sure of their position; and as new players emerge every year, it makes the game more exciting to watch!

Companies like Huawei or Xiaomi participate in the tough competition by offering similar quality with lower prices. Their growth may be slow in the UK - for Huawei in the last 12 months the increase was only 2.38% - but it’s steady, and is accompanied by increased brand awareness over the last few years. Yougov research tells us that between October 2016 and 2018 their ‘Awareness score’ has jumped from 45% to 66%. Also in the same period, the number of UK customers who would consider purchasing a Huawei device increased from 5% to 14%.

Xiaomi is the the 4th largest smartphone vendor in the world, with a 8.39% market share in Europe. However its expansion towards the UK market has just started - in the last year they only managed to grow from 1.06% to 1.34%. 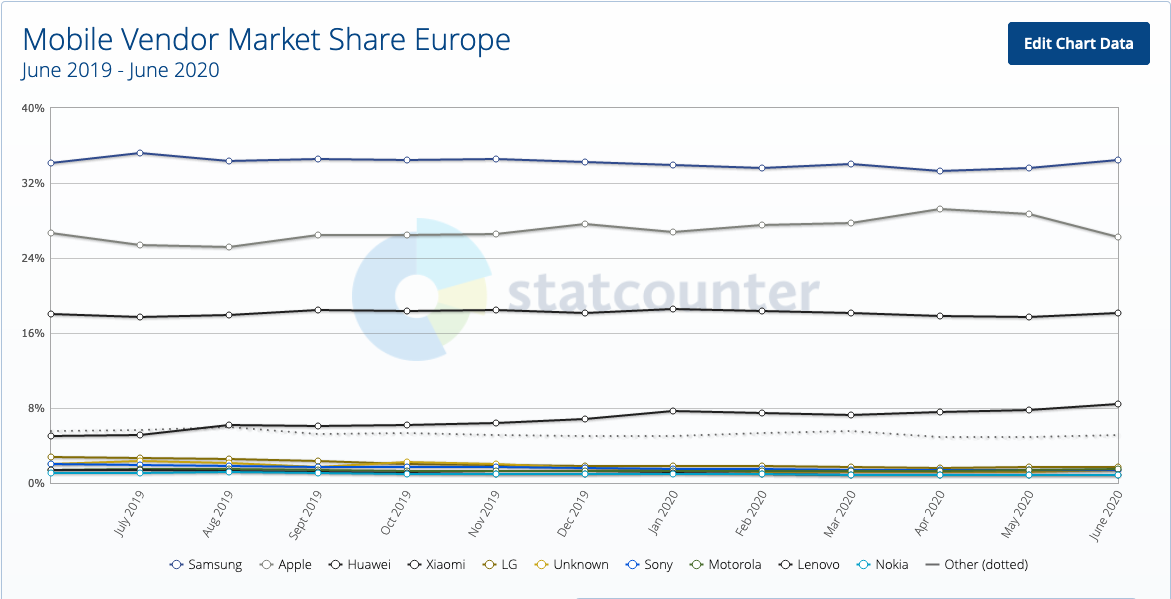 We also saw that Xiaomi did some effort to gain more sympathy from Anglo-Saxon users as they officially entered UK market in 2018 with big launch event. However recently we also learnt that the first and only official Xiaomi shop in UK was closed; a decision which makes the future of the brand in the UK uncertain.

Having it all in mind Xiaomi devices don’t seem to deserve a lot of attention when it comes to decide what devices your app should support when targetting the UK market. However it’s worth to keep in mind this brand’s global popularity and also that they often outrun the competitors in offering new technologies sooner - like the the world’s 1st 3 border bezel-less phone - a habit which could turn the tides for the company in the future.

Also we need to be cautious when speaking about the future of Huawei as:

“On May 16, 2019, the US government placed Huawei on its Entity List. This government action prohibits all US companies, including Google, from collaborating with Huawei. This means that Google is prohibited from working with Huawei on new device models or providing Google’s apps including Gmail, Maps, YouTube, the Play Store and others for preload or download on these devices.”

What it means for the users is that any device released after May 2019 is basically blocked from installing apps using the official distribution source - Play Store. Huawei has already launched their own distribution platform - AppGallery, which at the moment misses lots of popular apps including Facebook and Instagram. The company clearly hopes that Google services will eventually become available in their store, similar to how it works with App Store on iOS. But for now it’s too early to say how the story will end and what development effort and costs may ensue.

The company who lived

There’s a company with a long tradition in the mobile industry who managed to survive the changes imposed by the smartphone revolution. One of the oldest players on the market, Motorola still means something both in UK and EU markets. The company was lucky enough, as in 2012 it was partially acquired by Google, helping the giant from Mountain View to secure some of the patents now widely used across different Android devices. At one point Motorola was responsible for producing the Google flagship device, Nexus, and shortly after was sold to Lenovo. For the last year, Motorola maintained a steady ~2% market share - which is not a lot, but still more than the current Google flagship device Pixel, with about 1.5% share.

To sum up the vendor market share in the UK and also give you some clear indication on what’re the favourite brands, have a look at the data I collected from the apps I had a chance to develop recently:

Source: own data collected between March and June 2020

It mostly confirms what we already discussed - Samsung and Huawei being the undisputed leaders. Also here are detailed lists of the most popular devices, grouped by the manufacturers and sorted by their popularity (most popular first):

There’s more to the Android fragmentation

Exploring the variety of OS versions and vendor market share doesn’t fully cover the topic of fragmentation; there’s more to look into, i.e. device screen size distribution or even forks, like Amazon’s Fire OS or CyanogenMod. But these are more technical, which I tried to avoid as I wanted this article to be accessible for not only devs but everyone engaged in the mobile industry. If you’d like to have a look at device screen sizes and density distribution, I recommend starting with the official Google dashboard. It’s a vast topic that deserves it’s own article.